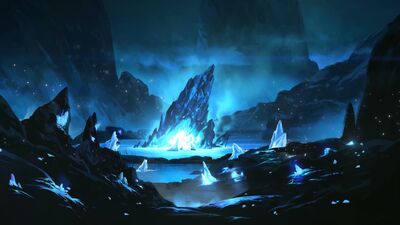 Elex is one of the Resources in ELEX and was introduced to Magalan by the meteoritic impact that brought about the end of the Old World in what is termed the Great Fall.

Each faction has different customs and laws regarding the consumption and use of Elex. While the Berserkers and Clerics oppose consumption - the former using it to produce Mana and the latter outright banning consumption as a sin in favor of using it to power their technology - the Albs consume it regularly as part of their culture. It has become so entrenched in all societies on Magalan that shards of this substance are used as currency.

When consumed, Elex enhances the body and suppresses human emotions while permitting the user to use pure, Cold logic in their decision-making. Sustained usage of Elex can be addictive, with the possibility for withdrawals when not accessible. While consuming pure Elex can make people stronger, allow them to think more clearly and free themselves of their emotions it also carries the risk of degenerating them into mutants who become so desperate for more they even try to devour mana.